Fresh to CS? Get a boost-up from here

Half of the software engineers in the Bay Area were from non-CS majors. With the standardized coding interview, everyone has an equal opportunity to become an SDE!

We guide you through the whole process of application/website development. Ready to get some hands-on experience?

How to prepare for coding interviews. How to find a job in leading tech companies. How to build a career in IT.

Customize the course content based on your background, area of interests and objective companies.

Solve algorithmic questions with engineers. Eyes on the top companies.

Build systems of your own! We guide you to implement and launch your products!

Design a system that scales to millions of users (AWS based)

Step 1: Outline use cases and constraints

Gather requirements and scope the problem. Ask questions to clarify use cases and constraints. Discuss assumptions.

Solving this problem takes an iterative approach of:
1) Benchmark/Load Test
2) Profile for bottlenecks
3) address bottlenecks while evaluating alternatives and trade-offs, and
4) repeat, which is good pattern for evolving basic designs to scalable designs.

Unless you have a background in AWS or are applying for a position that requires AWS knowledge, AWS-specific details are not a requirement. However, much of the principles discussed in this exercise can apply more generally outside of the AWS ecosystem.

We'll scope the problem to handle only the following use cases

Clarify with your interviewer if you should run back-of-the-envelope usage calculations.

Outline a high level design with all important components. 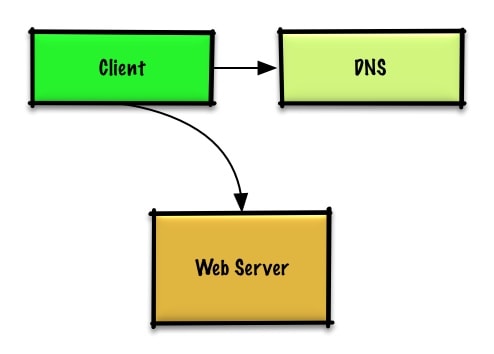 Dive into details for each core component.

Use case: User makes a read or write request

Start with a single box

The constraints assume there is a need for relational data. We can start off using a MySQL Database on the single box.
Trade-offs, alternatives, and additional details:

Add a DNS such as Route 53 to map the domain to the instance's public IP.

Identify and address bottlenecks, given the constraints. 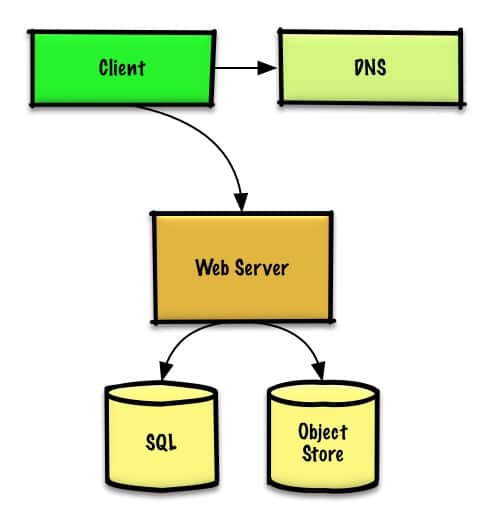 Our user count is starting to pick up and the load is increasing on our single box. Our Benchmarks/Load Tests and Profiling are pointing to the MySQL Database taking up more and more memory and CPU resources, while the user content is filling up disk space.

We've been able to address these issues with Vertical Scaling so far. Unfortunately, this has become quite expensive and it doesn't allow for independent scaling of the MySQL Database and Web Server.

Move the MySQL database to a separate box

Our Benchmarks/Load Tests and Profiling **show that our single **Web Server bottlenecks during peak hours, resulting in slow responses and in some cases, downtime. As the service matures, we'd also like to move towards higher availability and redundancy.

Our Benchmarks/Load Tests and Profiling show that we are read-heavy (100:1 with writes) and our database is suffering from poor performance from the high read requests. 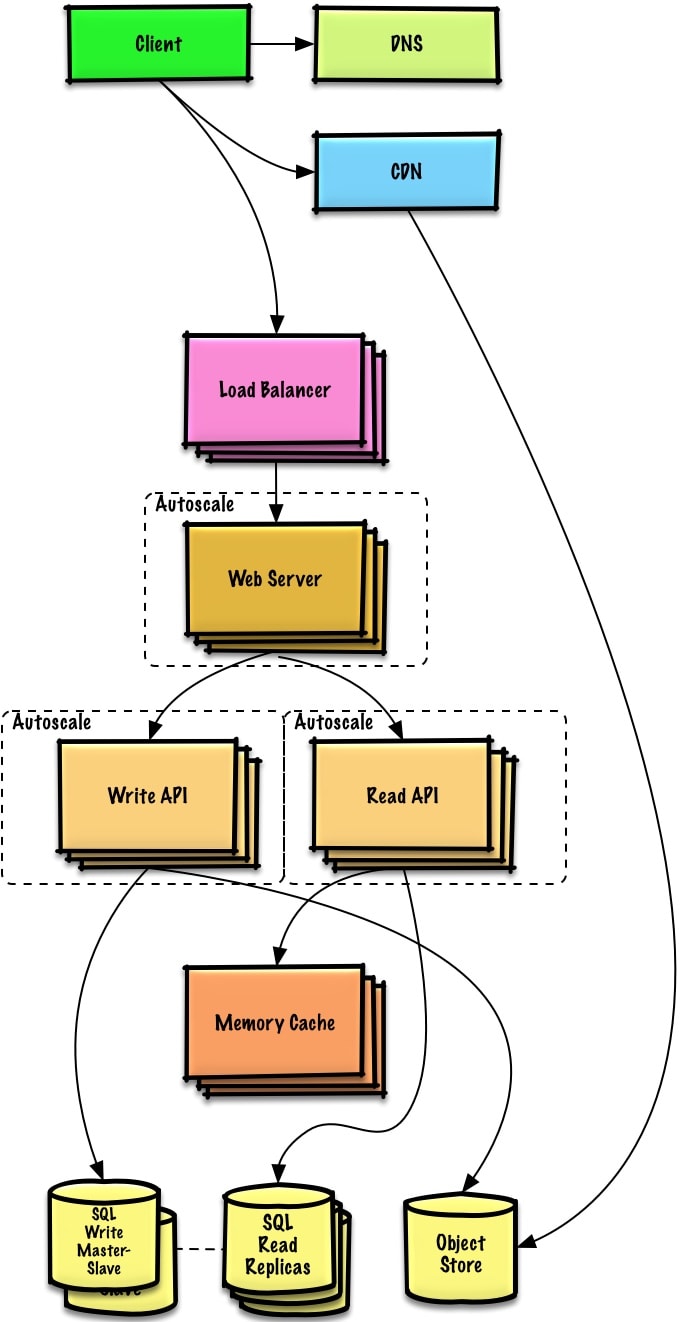 Our Benchmarks/Load Tests and Profiling show that our traffic spikes during regular business hours in the U.S. and drop significantly when users leave the office. We think we can cut costs by automatically spinning up and down servers based on actual load. We're a small shop so we'd like to automate as much of the DevOps as possible for Autoscaling and for the general operations. 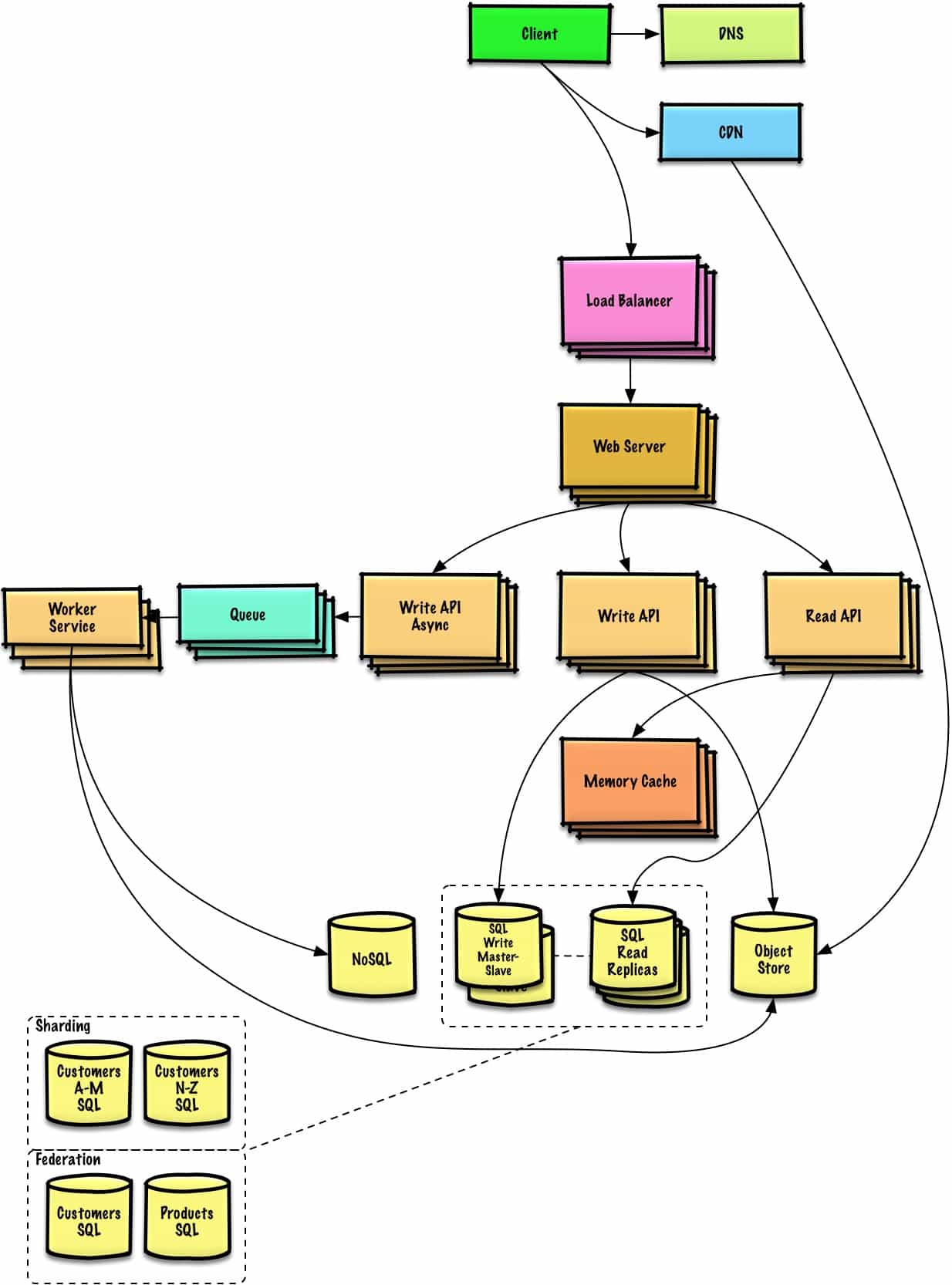 As the service continues to grow towards the figures outlined in the constraints, we iteratively run Benchmarks/Load Tests and Profiling to uncover and address new bottlenecks.

We'll continue to address scaling issues due to the problem's constraints:

To further address the high read and write requests, we should also consider moving appropriate data to a NoSQL Database such as DynamoDB.

We can further separate out our Application Servers to allow for independent scaling. Batch processes or computations that do not need to be done in real-time can be done Asynchronously with Queues and Workers: